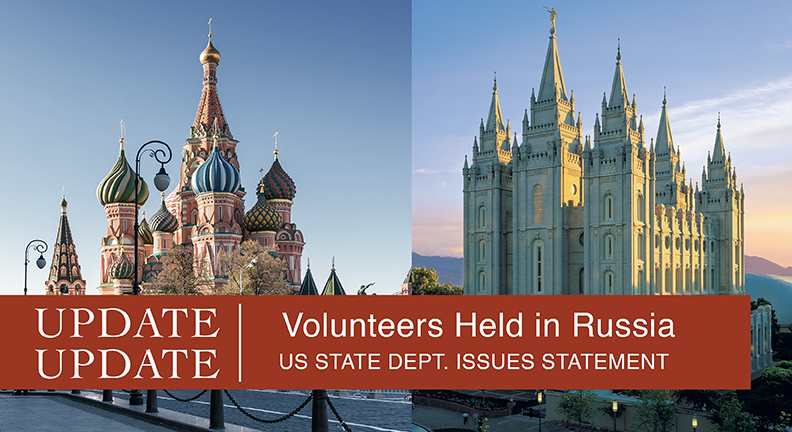 UPDATED DETAILS: It was confirmed by the United States State Dept. that the Russian police did in fact arrest two Latter-day Saint volunteers while they were at a church meetinghouse on Friday. According to a Church spokesman the authorities continue to detain them in Novorossiysk, a city on the Black Sea.

“While we are grateful these young men are reportedly in good condition and are being treated well, we are troubled by the circumstances surrounding their detention,” said Eric Hawkins, spokesman for The Church of Jesus Christ of Latter-day Saints. “They have both spoken to their parents. We will continue to work with local authorities and encourage the swift release of these volunteers.”

The father of one volunteer said “the two young men are doing well. The mission president traveled to Novorossiysk and is meeting daily with them.” On Monday, the mission president, where the young volunteers are serving, was allowed to bring his cellphone into where the boys are being held and have them call home.”

The father went on to say: “We’re doing a little better. We talked with the elders, with our son, yesterday, last night. … It was such a relief and so nice. It was really, really a sweet moment. I think he is fine. He told us that they are fine. They’re getting food.” He said “a Saturday court hearing, in which the volunteers were represented by attorneys provided by the church, did not resolve the issue.” An agreement to have the two volunteers surrender their visas and leave the country was sought but no agreement has been made yet.

The father said officials believed the volunteers were teaching English without a license. The volunteers said they only were conducting a regularly scheduled game night in English.

“We are aware of reports of two U.S. citizens detained in Novorossiysk, Russia,” according to State Department spokesperson. “We have no higher priority than the protection of U.S. citizens abroad. Due to privacy considerations, we do not have any additional information at this time.”

In 2016 Russia Government enacted an anti-terrorism law that banned public missionary work. The Church of Jesus Christ of Latter-day Saints immediately complied. Young missionaries were designated as volunteers and directed to follow the law’s provision that all proselytizing take place in houses of worship.