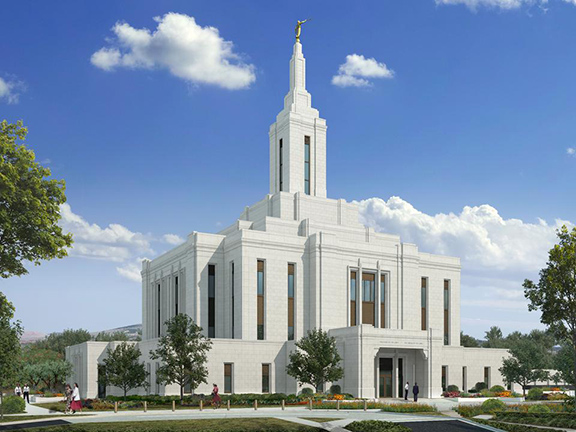 NAUVOO NEWS – An artist rendering of the Pocatello Idaho Temple of The Church of Jesus Christ of Latter-day Saints was released today.

The rendering features a three-story temple with a center spire. The temple will be located east of Satterfield Drive and Butte Street in Pocatello in a new subdivision known as Crestview Estates – Division 2.

This will be the sixth temple in Idaho, a state with nearly half a million members of the Church. The temple was first announced in April 2017 by then Church President Thomas S. Monson.

Construction on the temple is expected to begin in 2019 and will take between two and three years to complete.

Members of The Church of Jesus Christ of Latter-day Saints consider temples to be the “house of the Lord,” the most sacred places on earth. Unlike meetinghouses, where Sabbath worship and weekly activities take place, temples are open throughout the week and closed on Sundays.