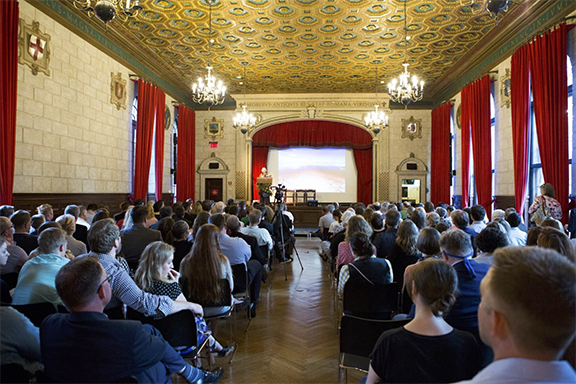 Elder Bruce R. McConkie of the Quorum of the Twelve Apostles had a brother who at one point seemed more poised to become famous than the well-known Apostle.

James W. McConkie was a composer who received his Ph.D. from Columbia and studied in Paris with some of the most important classical music teachers of the 20th century.

However, in the early 1950s before the public availability of a polio vaccine, all three of James McConkie’s children contracted the deadly illness. Doctors warned that the children were extremely contagious and should not be touched, but as James watched his children suffer, he kissed one of them on the forehead and eventually contracted the illness. Although each of the children survived, James McConkie passed away at 32 years old.

His unexpected death left his family heartbroken and grieving. Many of his compositions and correspondences were put in a box and there remained for decades.

“It was an unspeakable tragedy,” said Judith McConkie, daughter-in-law to James McConkie. “Through all these years, people could not bear to deal with the loss.”

Last month, James W. McConkie’s work was performed at New York City’s Carnegie Hall as part of the Mormon Arts Festival. According to Judith McConkie, his music has brought solace to the family as they have been able to honor their loved one’s work.

“It became something that everyone in the family could respond to and be grateful for because these are works of faith and joy [by] a remarkable mind,” she said. “It opened up the box and let us talk.”

Poet, writer and publisher Glen Nelson describes the role he and well-known historian, educator and author Richard Bushman have as founders of the Mormon Arts Festival as half-archeologists and half-spies.

“The Church is so good at the things that they do, but sometimes it’s really difficult to find people who fly under the radar,” he said.

The Mormon Arts Festival is advised by a board that includes, besides Bushman and Nelson, Dave Checkets and Sister Harriet Uchtdorf, wife of Elder Dieter F. Uchtdorf of the Quorum of the Twelve Apostles.