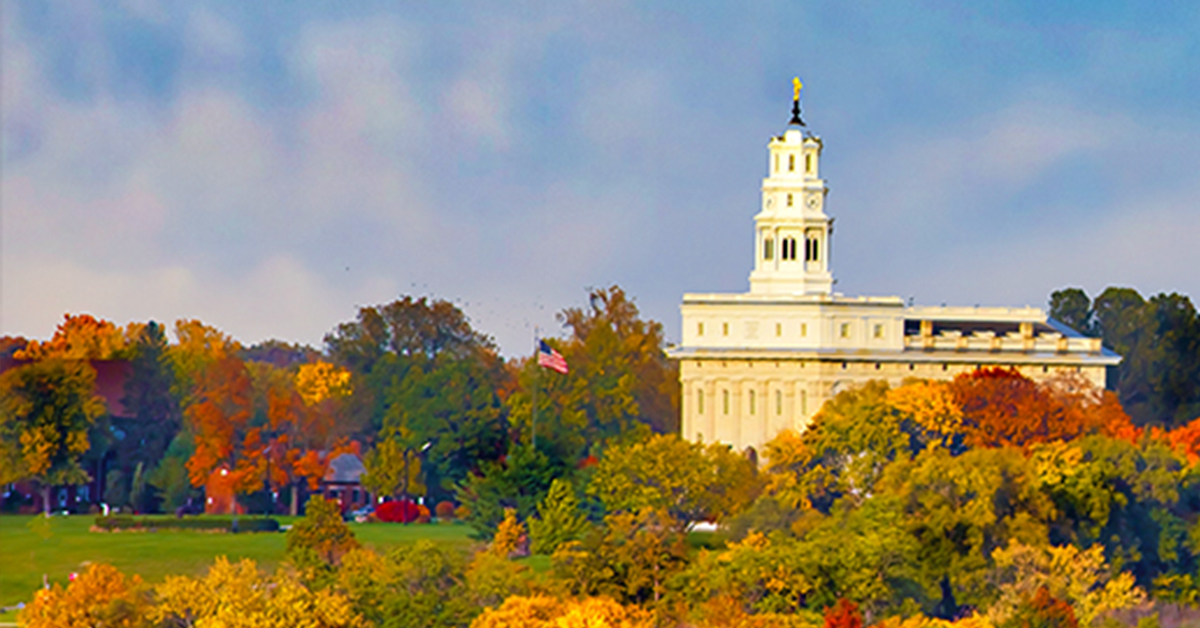 Beginning in the winter of 1838, the early Saints of The Church of Jesus Christ of Latter-day Saints left Missouri and gathered together on land that they had helped claim from a disease-ridden swamp. In Nauvoo they built a city, a temple, and a way of life that would define the early years of the Restoration in the minds of thousands of their descendants.

Every year, modern-day Saints of the Church gather to remember and reenact some of these early stories in the pageants at Nauvoo. And while thousands come to see the performances and relive historical accounts, many visitors to Nauvoo experience new stories of their own.

Even though most of the people who work on or perform for the pageants are volunteers, those who go to the pageant expecting an amateur production will likely find much more quality than they anticipated. A local television advertisement for the pageants went so far as to laud their “Broadway-quality” production and performances.

However, the pageants and the events surrounding them are not meant just to entertain. Everything about the pageants at Nauvoo and the events surrounding them is intended not only to teach Church history to members but also to provide a spiritual experience to members and nonmembers alike. Members of the volunteer cast are set apart as special representatives of the Church before they begin their service, and their goal is to help spread the gospel. Before and after every performance, members of the pageants’ casts take time to talk with visitors, and the local missionaries have a station at the pre-pageant country fair to talk to interested visitors.

Even though the vast majority of the volunteers do not have speaking parts in the pageants, they are still communicating their testimonies to the audience.

“There’s such a powerful spirit,” said Nate Stephens, who volunteered with this year’s family cast of the pageant. “Every night you hear of people who are just touched … and it doesn’t matter how many times we mess up or how many things I see go wrong onstage, they have an amazing experience. The audience feels the spirit of what we’re trying to do here.”

Stephens remembered speaking to a couple from Ecuador after one pageant performance. After Stephens took a picture for them, the man tried to speak with him, but didn’t know much English. “He just put his hands up on his heart … and he got really emotional, started to tear up, and said ‘muy especial,’ very special … and he came over and he gave me a big hug.”

Stephens continued, “It was pretty cool, too, to see how much you can communicate the feelings that you’re having … even though you can’t speak the words.”

Stephens’s young son Joel also talked to visitors at the pageant—a lot of visitors. “I said I was going to talk to and meet 40 people,” he said. He ended up meeting about 170. Another night, Joel and his cousin also convinced 50 more people to come learn the dance that his family was helping to teach at the country fair.

These little things are often the first step in missionary work. Carolyn Franklin, another member of the family cast, talked about friends she had made while talking to people at the pageant.

One woman Franklin talked to was not a member and didn’t seem interested in joining the Church, but they spoke openly with each other about their beliefs, and the woman returned to the pageant another day to speak with Franklin again.

“She just felt welcome,” Franklin said of the woman she’d met, “and you never know. She may never join the Church—she may down the line, I don’t even know—but she made her way to come here again and to try to talk to us and just have that friendship.”

As the cast and other volunteers meet together in preparation for their performances, one often-repeated sentiment is everyone who comes to Nauvoo does so for a reason—even if they don’t realize it at first.

Crusan Epps said this was the case for her the first time she visited Nauvoo, saying that although she was not active in the Church at the time, she kept feeling that she should take her girls and visit the Nauvoo Pageant.

“I wasn’t thinking of it as Church history; I was thinking of it as family vacation. … I hadn’t been active in Church in over 13 years … [but] I knew I needed to be here, for some reason. Something kept pushing me.”

While watching the pageant and going around the city, Epps was deeply affected. “I truly had not felt the Spirit in, I don’t even know how long—13 years at least, probably—and I felt the Spirit so strong throughout the entire pageant, and then at the end when they sang ‘The Spirit of God’ I was just weeping.”

Epps was also touched when one of the cast at another performance portraying the Saints leaving Nauvoo took the time to speak to her personally. “She put my face in her hands and said ‘You made it. We’ve been waiting for you,’” Epps remembered. “So I know that there’s a reason that I came here.”

Epps returned to activity in the Church, and she now volunteers with the Nauvoo Pageant Bagpipe Band, speaking to people who come to watch their performances in Nauvoo and the surrounding communities.

“It’s just become a huge part of our lives,” she said. “I can’t imagine where I would be today if I hadn’t brought my girls to Nauvoo that year. … It was just life altering. It was just a huge pivotal point of my life. And I can’t imagine anything different.”

A place of miracles

In one scene of Truth Will Prevail, a character explains that someone who asks a question of God will always receive an answer. It may be something dramatic such as a vision, like the one that Joseph Smith saw, or it may begin as something small.

Carlos Schulz, who was volunteering with his wife and children in the family cast for their fourth year in a row, explained how a miracle that he experienced while attending the Nauvoo Pageant helped him along his path toward the gospel. His wife and children, who were members of the Church, had convinced him to go and see the pageant.

“It was pouring rain most of the day,” Schulz recalled.

“I told my wife … ‘I’m not going to go sit in the rainstorm and watch a play,’” adding that he’d told them no matter how much they prayed, “You guys just can’t alter science. If you look at the radar, it’s not going to happen.”

The storm separated and went around Nauvoo, and the family watched the pageant.

After this miraculous occurrence, it still took Schulz some time before he began speaking with the missionaries.

“There’s been several things besides just that event that were softening my heart and preparing me for that moment.” Eventually he was baptized and sealed to his family.

Through his experiences before, during, and after his family’s first visit to the Nauvoo Pageant, Schulz’s testimony of the gospel has grown, and it continues to grow. He mentioned how even this latest visit to Nauvoo had helped him learn something for himself.

“Things don’t happen by chance; things happen for a reason,” he said.

His son received his mission call while volunteering at the pageants with the rest of the family and was assigned to labor in Cochabamba, Bolivia. The very next night, during the country fair, his son met a nonmember visitor who lived in the same place where he had just learned he would serve.

“She was just glowing when she met him,” Schulz said, saying that the woman gave the soon-to-be-Elder Schulz her contact information and invited him to come visit her when he was in the country.

“What are the chances?” Schulz asked. “In 3,000 people you find the one lady from Cochabamba, Bolivia?”

This helped him see that, as he puts it, “there is a plan.”

The Nauvoo pageants and the events surrounding them are intended to bring people closer to Christ and closer to His Church and His gospel. Many volunteers have seen how important their example is for this goal.

Stephens, who met the couple from Ecuador, also met a woman whose husband had installed some equipment in a Church-owned building in Nauvoo several months before. While doing his work, the man interacted with some of the senior missionaries assigned to Nauvoo.

He was so impressed with what they were doing there and with the senior missionaries who “were just so helpful and kind and thoughtful,” he told his wife, “We need to go to Nauvoo and see what this is all about.”

The way that those missionaries were living the gospel and showing charity to others showed their new friend that there was something good in their work and something good about the gospel—a simple, powerful testimony.

Franklin expressed similar thoughts on missionary work: “I’m a returned missionary. … Even so, we all have those fears of actually talking to people and how they’re going to react to the Church because it’s something dear to us. But I think [it’s] just being friendly. … They’ve had a positive interaction with somebody here, and hopefully that’s maybe what they needed.”

Accepting the gospel with real intent brings about miraculous and lasting changes.

Schulz concluded the story of his conversion by explaining how his life had changed after his baptism: “I know that my relationship with my wife and my family has changed exponentially for the better. We’ve been married almost 20 years, and … for the first 14 it was difficult to say the best, because of me, the person I was. … I lived my life the way I wanted to live it, and nobody was going to tell me any different. … The day I got baptized, it changed. And so for the last six years, it’s been about our family and what could we do as a family. What can I do to provide for them, what can I do to uphold the priesthood in the house, what can I do to support my wife, … and it’s changed everything because of that. Changing the focus away from me and putting it on our family has just made it so much better.