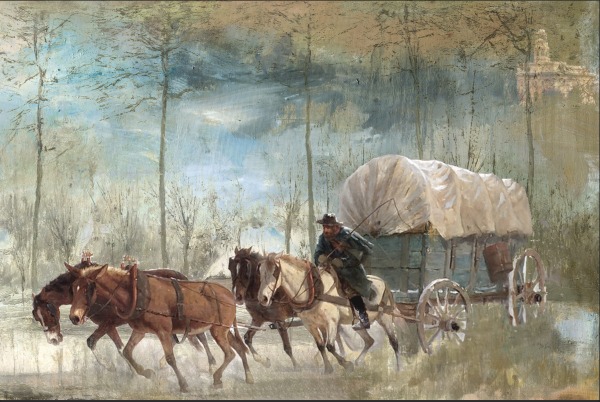 Some 500 members, missionaries, and visitors walked the Trail of Hope on Saturday, February 3, commemorating the exodus of the Mormon pioneers from this city 172 years ago. The annual Nauvoo Exodus Commemoration is hosted by the Church of Jesus Christ of Latter-day Saints.

Temperatures were dauntingly cold—near freezing, accompanied by a brisk wind—and served as reminders of the conditions faced by the Latter-day Saints when their exodus began on February 4, 1846.

Flags snapped loudly in the breeze. A few of the marchers stepped carefully out on the ice at the edge of the Mississippi River and gazed across at Iowa as they thought about the trials that lay ahead of their ancestors who came to this crossing.

Those who marched in this year’s pioneer exodus reenactment pinned to their coats badges with the names of people who had lived in Nauvoo. Many marchers wore more than one ancestor’s name; some of these ancestral connections had only been discovered in recent weeks as they prepared for the exodus commemoration by doing family history research.

Many participants drove long distances to be part of the event. Some came from other areas of Illinois, from Iowa, and from Missouri.

For some, like Barbara Barros of Star Valley, Wyoming, this year was a repeat of something they have done before. Sister Barrus has come to the exodus commemoration for the past 14 years in a row. It is, she says, one way to honor the sacrifices of her ancestors. Pinned on her coat today she wore the name of Nancy Ann Wilson. Sister Barrus is a great-great-great-granddaughter of Dunbar Wilson, who was called in section 124 of the Doctrine and Covenants as a member of the high council in Nauvoo.

Those marching in this 2018 commemoration in Nauvoo met first at the Family Living Center, behind the historic Cultural Hall in the center of old Nauvoo. They enjoyed hot chocolate or cider with cinnamon rolls and muffins. They were welcomed by President Mark Lusvardi of the Illinois Nauvoo Mission and heard brief comments by Susan Sims, Public Affairs representative for the Church’s Iowa Des Moines Public Affairs Council. She spoke of the faith of the Nauvoo pioneers and their willingness to sacrifice for their belief in the Lord Jesus Christ.

The Nauvoo exodus commemoration reenactment was covered by representatives of a regional newspaper and of public radio.

After the welcoming remarks, the marchers formed ranks in the street next to the Cultural Hall. They were led by a flag bearer and drummer boy followed by a contingent dressed as the Nauvoo Legion. Behind them came missionaries and members carrying flags of many of the nations from which the pioneer residents of Nauvoo had come. Following these flag bearers came other people walking—many families—and some participants riding in horse-drawn buggies and wagons. Participants ranged in age from their 80s down to infants or toddlers bundled in strollers and children’s wagons.

They moved out heading south on Main to Parley Street, then proceeded west to the river crossing at the end of Parley.

At the Pioneer Memorial next to the Mississippi River, there was a flag-raising ceremony, with singing of “The Star-Spangled Banner” and reciting of the Pledge of Allegiance. President Lusvardi made brief remarks honoring the pioneers. Ben Pykles, curator of Church historical sites, offered comments about the pioneers’ sacrifices. A closing prayer was offered by Lachlan Mackay, an apostle of the Community of Christ church.

The Community of Christ sponsored other events during the weekend in connection with the commemoration. These included a meeting at which Brother Pykles spoke. All of the weekend’s events were well-publicized in Nauvoo and surrounding areas.