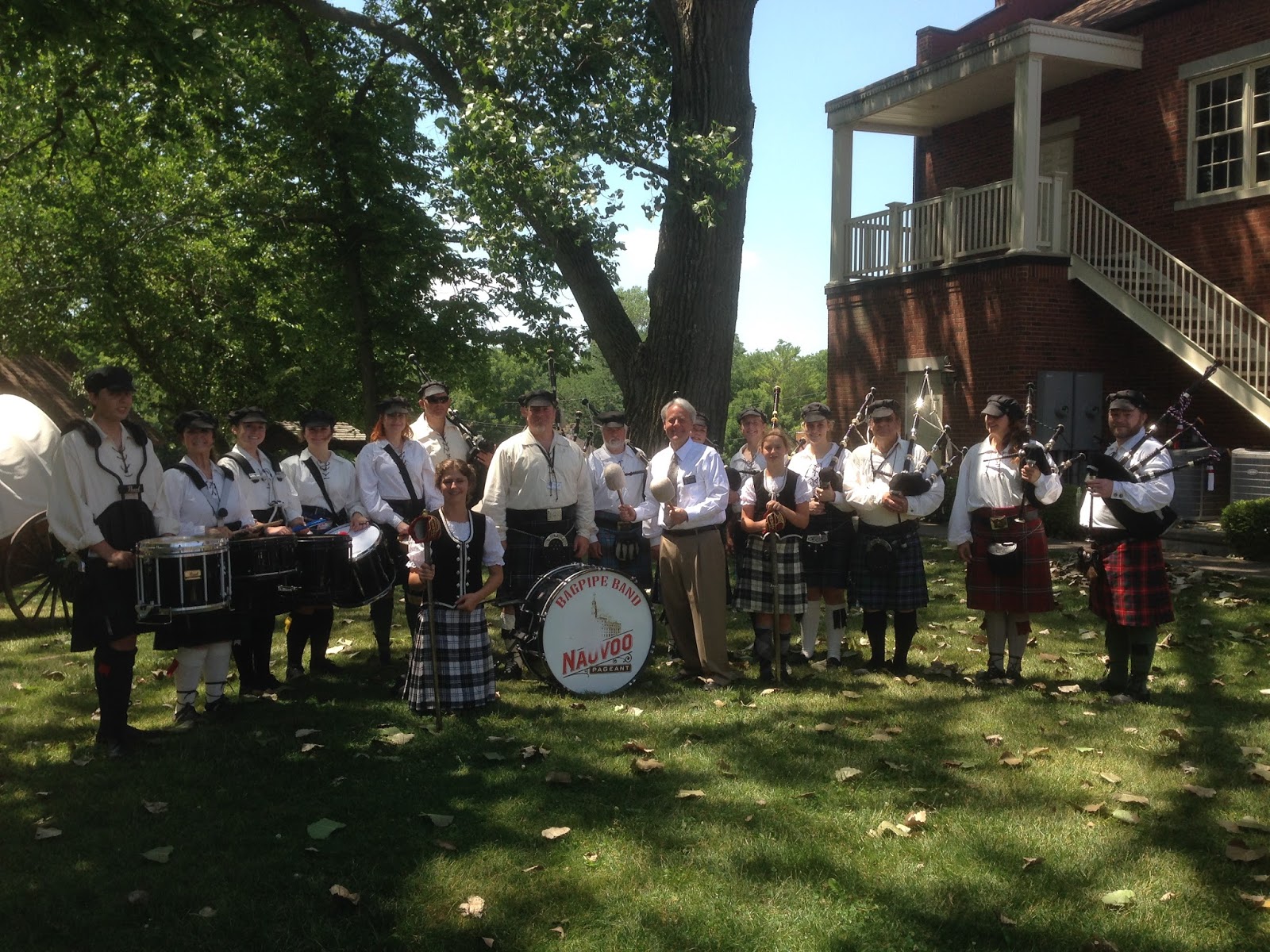 NAUVOO NEWS – There are many traditions associated with Nauvoo — and young bagpipers are one of the new traditions strongly linked to the Nauvoo Pageant.

As far as 10 miles down the Mississippi River you hear them. The music of the Nauvoo bagpipe Band pierces the humid summer air, keeping cadence with the rhythmic tap, tap, tap of a snare drum. Soon a crowd gathers around red, purple, yellow, green, and orange banners as an impromptu parade follows the bagpipers, signaling that the Nauvoo Pageant is about to begin.

The bagpipe band involves youth from around the United States, but it has a special significance to members of the Hezseltine family of Murray, Utah. Each summer for the past three years, Hezseltines have played in the band. Calum and Thomas, 17 and 20, and their dad, Paul, chose to master this unique instrument because it’s part of their family heritage; Brother Hezseltine was born in England and raised in Scotland. “Playing the bagpipes takes you to a lot of places,” says Calum. For example, he’s performed in New York, at the Arlington National Cemetery in Virginia, and for the National Boy Scout Jamboree in Gettysburg, Pennsylvania.

Bagpipers in the Nauvoo Pageant band volunteer for an average of two weeks, performing in the pre-show, daily vignettes (15-minute “mini-plays”), and the pageant itself. It’s an opportunity for them to develop their talent, make friends, experience old Nauvoo, learn about early Church history, draw closer as a family, build testimony, and share the gospel.

“Playing in the Nauvoo Pageant really helped strengthen my testimony of Joseph Smith and appreciation of the pioneers,” says Austin McDonough, 19. Ben Furner agrees. He is currently in the Philippines and, like many Nauvoo bagpipe band alumni, is serving a full-time mission. “In Nauvoo there were a lot of awesome chances to share small messages about the gospel with people after we’d stop playing,” he says. “The Nauvoo bagpipes really set the tone and helped the visitors get ready to feel and understand the guidance of the Spirit.”

Remember those lullabies your parents would softly sing to you as a child? When Calum and Thomas think bedtime, they think bagpipes. “I wanted to learn to play the bagpipes because as a kid I heard my dad play all the time. It might be hard to believe, but it is what I used to fall asleep to,” says Thomas, now a missionary in Paraguay. Over the years the Hezseltines have marched in parades and performed at concerts and funerals. “The best part is spending time together with my sons before we play,” says Brother Hezseltine. “We have so few opportunities nowadays to spend time together as a family. At Nauvoo, especially, we were constantly together, day after day. That was priceless.”

Several Nauvoo bagpipers have similar family ties. Christopher Putnam, 17, played the snare drum in the Nauvoo bagpipe band alongside his father, Barry, a bagpiper. “Our family was able to bond and become closer than we usually are,” says Christopher of his Nauvoo experience. “We were able to keep it up when we got home. We are more kind to each other.”

His dad also believes their pageant participation strengthened their family. “It has brought new meaning into our family,” he says. “There’s added happiness in the home because of it.”

Michael Morgan, 14, and his mom, Cheri, also played the bagpipes at Nauvoo. They both learned how to play four years ago as a tribute to Michael’s grandfather, who was diagnosed with terminal cancer. “He really liked the bagpipes,” explains Michael. “So my mom thought, why not let him listen to them before he dies and not just have them played at his funeral.” After hearing the bagpiper play at his grandfather’s bedside, Michael and his mom decided to take lessons together. Now they are part of a bagpipe band that tours the country. “Developing a talent together as a family is great,” says Sister Morgan. “When you spend so much time together, you can’t help but communicate; you are close because you are together.” Michael agrees and adds, “It’s fun to be unique.”

Bagpipes were once called war pipes because they were played to both rally the troops and terrify the enemy. Their tunes were even used to help command fighters on the field. The pipes are still a worldwide symbol of power, strength, freedom, and honor.

And there’s no question the bagpipes can be an intimidating instrument to learn. Beginning pipers start on a practice chanter for 6 to 12 months before they move to the bagpipes. “You have to retrain your fingers to move independently, and in the right way,” says Elder Furner. “Every piper has his or her own rhythm and their own way of breathing. It’s finding your own way that seems to take up most of your practice time.”

“It takes a year just to build up your lungs,” says Calum. Before playing the first note, pipers take several deep breaths to fill up the bag with air. “It is hard to keep from blacking out when practicing sometimes,” says Drew Babcock, 17.

“The toughest part about learning the bagpipes was sticking it out,” says Austin, who has been playing for four years. Tyler Abeyta, a former Nauvoo band member currently serving a mission in Sacramento, California, agrees. “I was 13, and after a month of trying to learn the bagpipes, I quit. My good friend was also taking lessons, and he encouraged me to start again. I knew with all my heart if I were to even come close to learning the pipes, I would need the help of my Heavenly Father. So I kneeled down one night. I asked Him for His help and His blessing to be upon me as I continued to learn. When I started again, I definitely knew that the Spirit was with me and helped me along the way.”

Playing the bagpipes isn’t without its hazards. “They have a lot of bugs—big bugs—in Nauvoo,” says Garrett Weixler, 16. “One night when we were playing on the stage a bug flew into my mouth. I swallowed it and kept on playing.”

Michael Morgan admits he sometimes gets ribbed by his friends about the traditional costume he wears when performing. “A lot of people make the mistake that it’s a skirt. It’s not; it’s a kilt! Some of my friends say, ‘Nice dress,’ but it’s all in fun.”

Christopher Putnam can relate. “Kilts have a long and proud history in Scotland. They were faster to move around in on the highlands and dried faster in the damp climate,” Christopher explains. Michael says the six yards of plaid wool can get pretty hot, especially in the middle of a Nauvoo summer. “But in winter it’s nice.”

The Salt in the Oatmeal

Ean Shelley, 17, was surprised when Elder Dallin H. Oaks of the Quorum of the Twelve Apostles approached him after a performance in Nauvoo. Elder Oaks told Ean, “The Nauvoo bagpipers are the salt in the oatmeal.” When Ean asked him what he meant, Elder Oaks explained that you have to put a little bit of salt into the oatmeal to make it taste just right. The Nauvoo bagpipers add that flavor to the experience.

“I think bagpipes can portray any human emotion,” says Elder Furner. Many Nauvoo bagpipers agree that the notes they play convey joy, peace, grief and sorrow all at once. “Despite the loudness of the pipes,” says Drew, “they bring the Spirit with force and power. They can pierce hearts and bring people to tears.”

Perhaps that’s why bagpipers are associated not only with parades and weddings, but with funerals. Calum and Thomas have played at several funerals with their dad, including their grandfather’s. “We usually escort the coffin to the grave,” explains Brother Hezseltine. “It is the last bit of respect you can give someone on this earth.”

Michael Morgan also believes the bagpipes can provide a salve for aching souls. “We practice in front of our house,” explains Michael. “One day I played ‘Abide with Me,’ and my neighbor came out and said, ‘Thanks, I really needed to hear that.’ It’s nice to be able to do that for someone.”

Instruments of the Spirit

The sun hovers just above the horizon as the parade of pipers leads the crowd to their seats. The Nauvoo bagpipe Band enter the stage, and their final notes linger above the audience, preparing them to hear the story of old Nauvoo. Behind them up a steep, grassy hill, the dwindling sunlight shines on the rebuilt Nauvoo Temple. “It was such a great honor to play the pipes in Nauvoo,” Elder Abeyta remembers. “The Spirit of the Lord is there in abundance. You can almost feel the early Saints by your side.”

Piping at the Pageant

“Playing at Nauvoo definitely improved my piping,” says Elder Ben Furner, who played in the Nauvoo Pageant bagpipe band in 2005. “And most importantly, it was the best preparation I could ever have had before my mission. I got used to being away from home. It got me used to talking with people I didn’t know. I loved every minute of it.”

“The Nauvoo bagpipe Band are a significant part of the spirit and missionary efforts of the Nauvoo Pageant,” says pageant administrator Bonnie Ashby. “Visitors are drawn to their distinctive sound, and the pipes represent the heritage of so many British converts who immigrated to Nauvoo in the 1840s.”

If you’d like to hear the Nauvoo Pageant bagpipe band music, visit the New Era Web site at www.newera.lds.org.

Playing the bagpipes has given Calum Hezseltine many opportunities for travel and to spend time with his brother and father, who also play.

For Michael Morgan (above) the best thing about playing in the Nauvoo Pageant was talking with people after the show. “Some didn’t know a lot about the Church,” he says. “We were able to explain it to them.” The Nauvoo bagpipe band changes each year with the addition of new people.