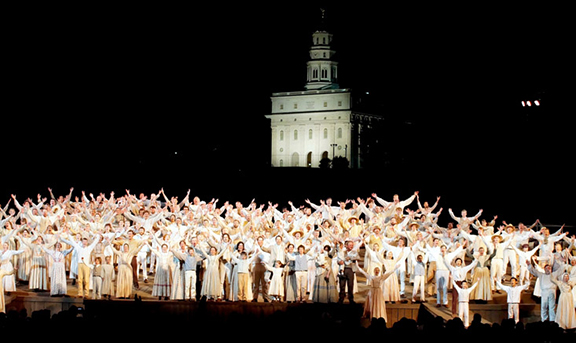 (Nauvoo, IL) For children the exploration of Nauvoo, Illinois, involves hoops:  wooden hoops to catch on a stick, to roll with a mallet or to bind the wooden wagon wheel in a bumpy ride over country roads. It may be a giant step for the electronically savvy kids of today, but a peek at the pioneer pastimes presented in a Nauvoo tour provides a bridge to historic family activities, a means of slowing the contemporary pace and making connections with years gone by.

The journey to Nauvoo, the historic restoration of an 1840s Mormon settlement, offers a link to the tales of pioneering effort and endurance, a hands-on exposure to the lifestyles of the settlers and a nostalgic glimpse of the past brought forward to current times.

“Nauvoo is a walk back in time,” reports recent visitor Jolene Jaster. “It’s an inviting place where one can find peace, serenity and excitement all combined.”

Exploration of the restored settlement begins with a meandering drive up the Great River Road Scenic Byway, a tree-lined path that borders the Mississippi River. Much of the geographic introduction to the bustling settlement revolves around the river: flocks of birds, freight-laden barges, river locks, drawbridges and patches of lily pads bursting from the water.

“Nauvoo is a site of uncommon beauty in any season,” says Roger Black, manager of public affairs for the restoration of the Nauvoo historical sites. “It’s one of America’s premier historic communities and designated as a National Historic Landmark District.”

The Mississippi River provided a useful economy for the ravaged and well-traveled early members of The Church of Jesus Christ of Latter-day Saints. After Church members were forced from Ohio and Missouri, they settled in Commerce, Illinois — a swampy bend of the Mississippi River. The city was renamed Nauvoo in October 1839, deriving its name from a Hebrew word meaning something pleasant or beautiful, or a place of rest and beauty. The Church’s founder, Joseph Smith, selected the swampy spot on a bend in the river as yet another stopover for the beleaguered converts to the faith.

That settlement, built to a thriving city in less than four years and abandoned in six, now serves as a connection to that industrious past, a reminder of the dedication and hard work that contributed to Nauvoo’s religious and economic success.

“Historic Nauvoo, along with the magnificent Nauvoo Temple, represents the culmination of the mission of the Prophet Joseph Smith,” explains Jennifer L. Lund, manager of historic sites for the Church. “The resulting city was a testament to the faith, obedience, sacrifice and charity of its people.”

Under the leadership of Smith, Nauvoo citizens focused on building another temple, but also constructing the Nauvoo House hotel. Family homes were first constructed as huts or tents but progressed to log structures and even substantial brick buildings. The temple, begun in 1840, however, received the greatest attention. Residents were invited to donate one day in ten, a tithe, to work on its construction.

In the religious focus of the Nauvoo period, Smith broadened latter-day understanding of the temple ordinances, emphasized missionary work and organized the Church’s women in their own group, the Relief Society.

What to See and Do

Today’s Nauvoo offers an intimate exposure to the stories of those early settlers — their cozy red brick homes, their business establishments and their cultural pursuits. Full-time missionaries, dressed in period clothing, relate the tales of industry, sacrifice and humor. Stories come to life in more than 40 restored sites. Visitors of all ages participate in a variety of family-friendly activities and collect traditional free souvenirs: a prairie diamond ringfrom the blacksmith shop, an inscribed red brick from the kilns and a ginger cookie from the Scovil Bakery.

The landmark site, the reconstructed Nauvoo Temple, stands up on the hill above the “Flats,” the location of the historic renovations and the visitors’ center. The rebuilt temple was completed and dedicated in June 2002. The temple is not open to visitors, but a center adjacent to the temple provides background information on the reconstruction, interior detail and purposes of temple worship in Latter-day Saint theology.

Summer days in Nauvoo fill with the sounds of the brass band, theatrical productions and guest performers. In addition to the full-time missionaries who present a musical history of the Nauvoo settlement in the Cultural Hall, a group of young performing missionaries adds to the seasonal repertoire.  Musical productions each night ALL SUMMER take the stage and provides a variety shows with the river as a backdrop. Touring groups from Brigham Young University also appear during the summer months.

The Nauvoo Pageant and the British Pageant are musical dramas in an outdoor setting, they’re preceded by a nightly country fair. The pageants run each year in July and plays every night except Sunday. The pageants and all of the other musical productions are free and tickets are not required.

A nearby site, the Carthage, Illinois, Jail includes a review of the 1844 martyrdom of Church leader Joseph Smith and his brother Hyrum. The original red limestone jail is open for visitors and is only 25 mins from Nauvoo.

A family visit to Nauvoo and Carthage provides an opportunity to explore the 19th-century beginnings of Mormonism in a series of varied experiences and activities. The exploration provides a broader understanding of the faith’s beginnings but also a glimpse into frontier life of the time.