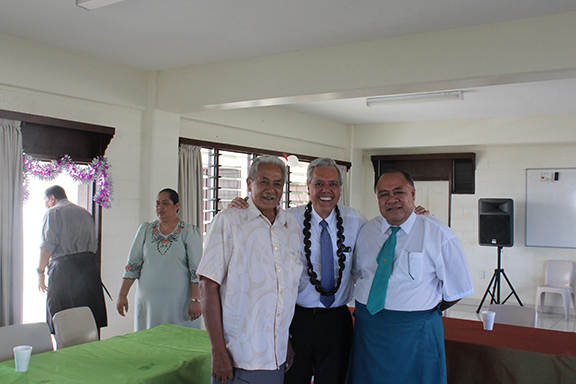 Germany: Refugee Mothers Receive Donation of Baby Supplies
An estimated 100 Mormon volunteers assembled baby supplies for young refugee mothers in Frankfurt. Latter-day Saints set up an efficient assembly line of socks, toys, diapers and other items for little boys and girls.  The event was organized by Mormon women who, for the second time in 2017, volunteered to help young refugee mothers in need of baby clothing and diapers.

Kenya: Every Drop of Water CountsFor the past 12 years, the Church’s service center has been supplying water to residents in a community in Nairobi. People place their jerrycans neatly along the curb so they can be filled Monday, Wednesday or Friday afternoons at no charge. Two companies pay for the water residents use. The jerrycan is the keeper of the precious resource, and people must make the most of the commodity each day — many families try to stretch a can of water to last an entire day. The jerrycan is also a symbol of hope that the drought will end.

Honduras: Mormon Women Donate Clothes to Local Hospital
More than 50 women from the local Mormon congregation donated their own clothing, shoes and personal use products they had been saving to the San Felipe Hospital and the Hospital del Tórax. One of the women said the experience was a pleasant one to be able to give of their time and clothes to people who need it most.

Kenya: Faith Results in Humanitarian Miracle
Without the faith and perseverance of Kenneth, a local resident, the Association of the Physically Disabled of Kenya (APDK) would have gone without clean water. His efforts helped convince everyone concerned to dig a borehole (water well). Initially, the director of the APDK did not want to pay its share of the project for fear it would fail. They had already drilled six other wells with no success. A hydrologist suggested a larger borehole, and now the successfully producing well is giving 70,000 liters (more than 18,000 gallons) of water in an eight-hour period of time.

Italy: Mormons Remove Graffiti From Museum Walls Latter-day Saints have removed years of graffiti from the outside walls of the home of Gabriele D’Annunzio, an Italian poet from the 1800s, in Pescara. Using a special paint/varnish, the Mormon volunteers brushed the mixture on the graffiti, not only to cover it up but also to protect the walls from being marred again.