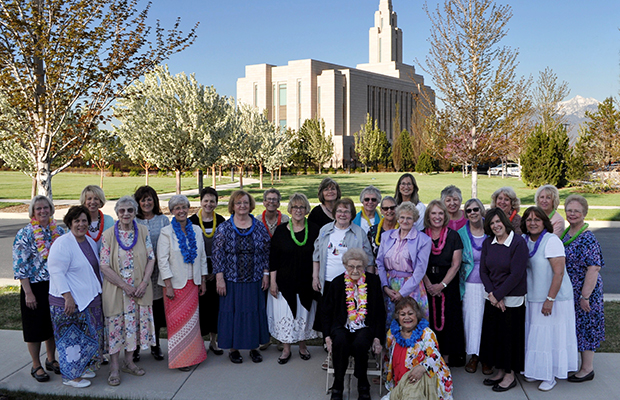 Anne Freiss doesn’t like anyone knowing or making a fuss about her age. She doesn’t like being the center of attention. And up until her recent release, she was the oldest temple ordinance worker serving in the Oquirrh Mountain Utah Temple.

Before moving to Utah, Sister Freiss lived in Arizona. She retired from her full-time job at age 83 and spent the next 10 years serving in the Mesa Arizona Temple. In 2012 she moved to Salt Lake, where she began her service as a 94-year-old ordinance worker in the Oquirrh Mountain Utah Temple.

She continued serving in the temple every week. Most weeks she drove herself, since she does not like to put anyone out. She was even still able to use the stairs.

“You don’t need to schedule a break for me,” Sister Freiss told her coordinator at the temple, Sister Debra L. Martin. The sisters who serve with Sister Freiss in the temple say she is a blessing to all around her.

Everyone loves this sweet woman. Her daughter Michelle Riggs said people in the temple “adore her and look to her as an example of pressing forward and enduring at any age.”

Last July, Sister Freiss had emergency surgery and was placed on a leave of absence. During that time, some of her fellow temple workers visited her in her home. A small group went to her house just before Christmas to sing carols to her. She readily joined in with the caroling.

Sister Freiss turned 100 years old on March 26, and she was back in the temple performing ordinances just a couple days later.

Her daughter Barbara Jensen worked with Sister Martin to arrange this special temple trip. Sister Freiss’s family members who were there said it was a privilege to participate. They described the experience as both spiritual and emotional.

“She was at peace. She was where she wanted to be—her memory on point, and she was amazed to be so welcomed back, even to tears, to have been able to return,” said Sister Riggs.

Her daughter-in-law Kathleen Freiss was grateful to witness and participate in the ordinances of the temple with her mother-in-law, whom she described as “our own 100-year-young mother who is still capable and sharp enough to fulfill her calling as an ordinance worker.”

“She was glowing even after we got home,” said Sister Riggs. “This experience, to be surrounded by family in a setting such as this, is a blessing never to be forgotten.”