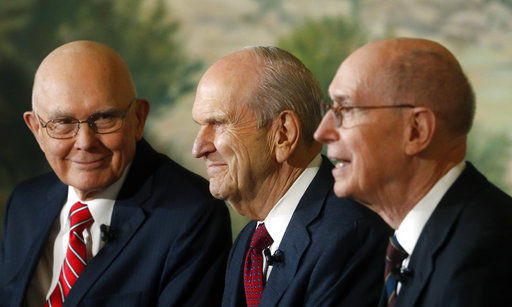 SALT LAKE CITY (AP) — The LDS Church is changing its guidelines for how local leaders handle sexual abuse reports and one-on-one meetings with youth a week after a former prominent missionary leader was accused of sexually assaulting two women in the 1980s.

The changes announced Monday by The Church of Jesus Christ of Latter-day Saints direct lay leaders never to disregard a report of abuse, a more direct instruction than previous guidelines.

A key new rule allows children to bring a parent or adult with them during one-one-one interviews with local church Bishop. Parents were only allowed in a hallway or adjacent room under old rules. Youth can still go in alone if they choose.

The guidelines also tell leaders to never encourage a person to stay in a home or situation where abuse is suspected, guidance not in there before. An introduction to the guidelines says most, but not all, “allegations of abuse made by assault victims are true, and should be taken seriously and handled with great care.”

The meetings with children usually happen twice a year starting at age 12. Bishops ask about topics such as school, sports, hobbies, education goals and family issues. The questions sometimes delve into sexual behavior because of the church’s strict teachings on abstinence before marriage.

Last year, a group of Mormons and ex-Mormons demanded an end to the one-on-one interviews and a prohibition on all sexual questions.

Sam Young, a Latter-day Saint father from Houston who is leading the campaign, said Tuesday the changes don’t go far enough. He said a parent or adult should be required for all meetings. He said sexual questions often become explicit and argues children should only be asked if they are obeying the faith’s law of chastity.

The group plans a protest march Friday in Salt Lake City and expects to deliver 50,000 signatures to church headquarters.

“Our march is even more important than it’s ever been because we know the church is listening,” said Young, 65, a former bishop and missionary. “I care about the church. This is my church. What are we’re doing harming these children gives my church a horrid name.”

LDS Church spokesman Eric Hawkins on Tuesday pointed to previous comments that the interviews allow bishops to get to know youth better and determine their religious habits and obedience to God. The bishops are instructed how to handle the meetings and swear to keep the conversations confidential, he said.

“They are counseled to not be unnecessarily probing or invasive in their questions, but should allow a young person to share their experiences, struggles and feelings,” Hawkins said.

She said she was molested around the age of 12 by a bishop in Bakersfield, California, causing her a lifetime of shame and leading her to leave the faith in her 20s. The Associated Press doesn’t normally name alleged victims of sexual abuse, but Hall agreed to share her story to support Young’s campaign and said she hopes other Mormon children don’t have to endure similar abuse.

She never reported her abuse and only recently confronted how it impacted her life, adding she is in therapy for post-traumatic stress disorder. “Asking children about sexual things is perverted,” Hall said.

A letter sent by new LDS Church president Russell M. Nelson to local and regional leaders in the U.S. and Canada announced the changes. “This global issue continues to be of great concern to us today,” Nelson wrote.

The changes come as the church investigates two allegations of sexual abuse against a former missionary leader in the 1980s. Joseph L. Bishop has denied the allegations through his adult son but he acknowledged in a police interview that he asked one of the women to expose her breasts at a time when he was president of the Missionary Training Center in Provo, Utah.

Bishop is also heard apologizing on a secretly recorded conversation made by one of the victims. He is heard saying he molested the second woman during a massage that he said got “too frisky.”

The church said it knew previously about both claims but declined to discipline Bishop because the allegations couldn’t be verified.