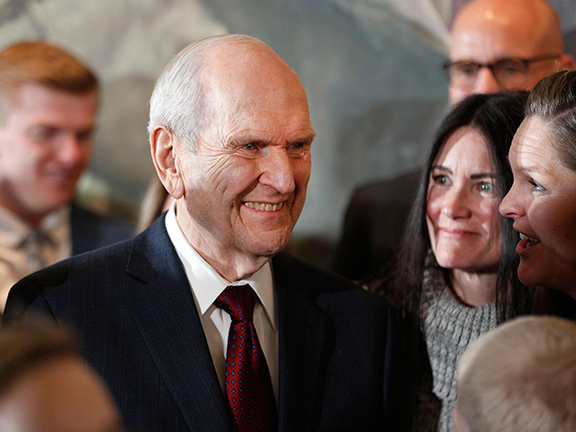 President Russell M. Nelson of The Church of Jesus Christ of Latter-day Saints spoke to a group of hundreds of young adults in Las Vegas, NV. President Nelson talked about finding purpose in life and avoiding temptations. His talk briefly touched on the recent killings of High School students in Florida and that gun laws “let people who should not have guns obtain them.”

“I know your hearts are heavy as is mine as we contemplate those ruthless killings in Florida this last week. I think of Alaina Petty, 14-year-old Latter-day Saint, her life snuffed out by that sniper’s bullet…. you and others to say, ‘how could God allow things like that to happen?’ Well, God allows us to have our agency, and men have passed laws that allow guns to go to people who shouldn’t have them.”

Several news outlets in Utah and nationally are reporting on the remarks since the recent shooting in Florida has reenergized the national conversation about current gun laws.

President Nelson began his overall address using a parable to emphasize that “your ultimate safety in this life lies in never taking the first enticing step toward going where you should not go and doing what you should not do.”  President Nelson told the young adults, participating in the fireside in four Las Vegas LDS meetinghouses, that they should learn to have purpose in this life, know who they are, why they are here and how to master the divine laws. “When you begin to catch even a glimpse of how your Heavenly Father sees you and what He is counting on you to do for Him, your life will never be the same,” President Nelson said.