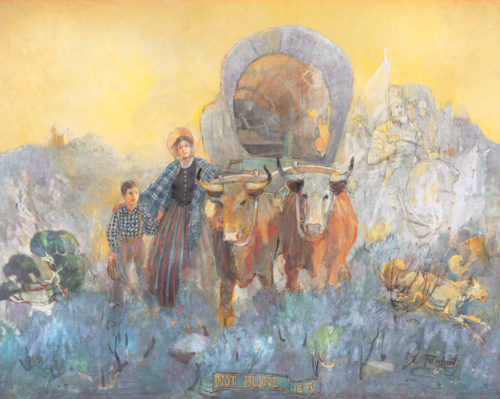 NAUVOO NEWS – LDS art in its varied forms — including painting, sculpture and architecture — helps create a vehicle to represent the teachings and doctrine of The Church of Jesus Christ of Latter-day Saints. From its earliest days to present, the Church has utilized art to tell its story.

“LDS Art helps to build bridges of communication at any level,” suggested Richard Oman, senior curator of the Church History Museum. “It provides understanding for everybody on any level because it is visual — you can see the image, and it has absolute emotional power.  The visual image helps reinforce gospel teachings, helps sink the message into the mind and the heart.”

In an increasingly cross-cultural Mormon environment, LDS art takes on a greater significance as a means of teaching and communication.

“Visual arts are crucial in the charge for effective cross-cultural communication,” Oman added. “Linguistics, though necessary, is a long and complicated process of sharing ideas. A visual approach is much quicker and provides rapid internalization.”

Such a philosophy is the basis for the 8th International LDS Art competition sponsored by the Church, an endeavor begun in 1987 and held every three years. After individuals worldwide submit creative endeavors in LDS Art of any medium, a juried process selects pieces to be a part of the exhibition. This year’s exhibit opened in the LDS Conference Center in Salt Lake City.

An international flare for LDS art and architecture found a place in the early years of Church organization. British, Scandinavian and Swiss LDS artists illustrated early events in the history of the Church. Others created portraits of Church leaders. Even the original temple building projects in Kirtland, Ohio, and Nauvoo, Illinois, felt the influence of the LDS artist’s touch.

In his instructions on building the unique Nauvoo Temple in the 1840s, Church founder Joseph Smith counseled temple architect William Weeks and others to employ persons “with knowledge of antiquities.” Brigham Young is known to have spent several days studying London’s cathedrals during the 1830s when he served as a missionary to Great Britain. That classical architectural influence appears in the construction details of the Salt Lake Temple.

In a bold move to expand the capabilities of its gifted artists, fourth Church president, Wilford Woodruff, in 1890 appointed John Hafen, Lorus Pratt and others to study in Paris and then to return to paint murals on the walls of temples. In addition, Church leader Heber J. Grant commissioned the returning Hafen to produce art for general Church use on a three-year assignment, beginning in 1907. President Grant continued to sponsor and encourage artists during his later term of service as Church president, often buying paintings at opportune times, and particularly during the Great Depression when the well-known WPA projects proliferated throughout the United States.  “When President Franklin D. Roosevelt kept the country’s arts alive during that difficult economic time, President Grant offered similar encouragement to LDS artists,” explained Robert O. Davis, senior curator at the Church History Museum.

“We must paint the great Mormon story of our pioneers,” Teichert noted in a eulogy she presented at the 1938 funeral of her mentor, Alice Merrill Horne. “We’ll tell our stories on the walls. … The religious art should be rich in story and backed by faith.”

Later Church leaders commissioned LDS artists to further illustrate concepts of doctrine. Arnold Freiberg depicted scenes from the Book of Mormon, while Harry Anderson recreated various events in the life of Jesus Christ. Both collections have become familiar images in defining the teachings of Mormonism.

Currently, other images available in the public domain have been digitally captured and electronically reproduced through a method known as giclée, according to Charles Baird of the Church’s Materials Management Department. “Computer technology enables us to make lasting quality reproductions of fine art pieces, a process that provides a broader circulation of the art itself as well as a means of conserving the original works,” Baird explained. Classic New Testament depictions of the Savior by renowned Danish artist Carl Bloch, for example, are included in the inventory of pieces approved for Churchwide distribution.

In addition to hundreds of available fine LDS art paintings and portraits, the Church utilizes a continually updated database called Telescope as a storage receptacle for more than 300,000 images describing and illustrating events, important sites and teachings of the faith. Such a resource, according to Allan R. Loyberg, director of graphic design and production for the Church’s Curriculum Department, brings a readily accessible and broad range of illustrations forward to meet the publication requirements of the Church.

In recent years, Loyberg’s staff has also organized and trained contract illustrators and photographers in many parts of the world to bring local and cross-cultural representation to printed materials.

“For example,” Loyberg explained, “a recent brochure prepared for the Missionary Department contained the same text but featured illustrations based on the geographic distribution — some were printed with people from Eastern Europe, Scandinavia or South America. This design localizes the message and creates a pocket of cross-cultural communication.”

Even a single symbol becomes an artistic icon in defining or representing the Latter-day Saint faith.

“The image of the Salt Lake Temple clearly represents Mormonism across the world,” suggested Oman.  “That readily recognized symbol illustrates what’s core to the belief. The temple, for example, represents connectedness of families, the glue that ties generations together, and that is a message broadcast by the building itself.”

Materials of highest quality decorate the interiors of temples in the Church.

Even in the 1830s when the Kirtland Temple was being built, the women of the Church were invited to grind their china as a plaster additive and a means of capturing light in the worship spaces.  Later, artists were sent abroad to expand their techniques and return to illustrate murals on temple walls. The famed Tiffany Glass and Decorating Company of New York designed several large art-glass windows placed in the Salt Lake temple.

Though the finest furnishings and pieces of art reside in the 129operating temples worldwide, the elegance assumes a secondary position to the religious purposes of temple worship.

“The design plan for a temple supports the work that occurs there,” explained Kathleen Bluth, interior designer for the Church’s Temple Department. “That plan progresses in color and detail as you move through the temple’s instructional phases. Design motifs or elements often reflect the geographic location of the temple.”

The newly completed Draper Utah Temple, for example, implements a sego lily motif in fabrics and floor coverings as well as a patchwork grid in its window design.  Both images reflect and represent the pioneer history attached to that southeastern part of the Salt Lake Valley.

In addition to the furnishings and the architectural elements of a temple design, works of fine art are included in the overall interiors plan.

“An art layout is designed for each temple,” Bluth added, “a layout based on square footage and location.”

Designers select installed pieces of LDS art in a variety of ways.

“An LDS art committee invites artists to submit original paintings for temple use,” Bluth continued.  “Other selections come from a catalog of approved art and include images widely used in other Church buildings or publications.”

Occasionally, a historic or notable piece of LDS art is included in the overall plan.

In Draper, for example, a painting by Lewis A. Ramsey depicting Joseph Smith’s first vocal prayer hangs near the baptistry. The painting, originally commissioned by and hung in the Draper Stake meeting house in the 1920s, was donated by the stake to the temple.

In the 2002 reconstruction of the Nauvoo Illinois Temple, keys to the historic temple of the 1840s held by the Quincy Illinois Historical Society were framed and hung in the temple.

Also in the reconstruction of the Nauvoo Temple, murals were reinstated as a part of the overall art scheme. Canvas panels, painted by a team of artists, were installed in that contemporary construction. More recent temple construction projects also include mural-covered walls, artistic design features that were prominent in the early temples.

“People love to see the art in the temple; it contributes to the comfort and peace they so often find during their instruction and learning there,” Bluth concludes.

And people learn from the visual representations of the teachings illustrated in a variety of artistic forms, not only in the temples of the Church, but in its other buildings and in numerous publications.

“If these [artistic] symbols and icons draw us closer to that which is holy,” suggested the late Dr. Ronald Jackson, formerly a professor of social sciences at Brigham Young University-Hawaii, “if they place in our hearts the ideals of the Savior, if the presence of these religious icons makes us a better people, and if they function as a missionary tool, then it is good and right that we have them around and with us.”