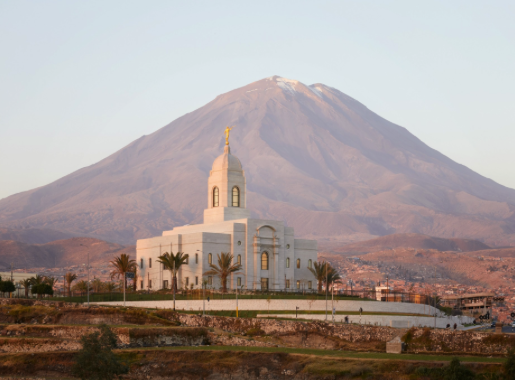 In 2021’s first temples-reopening announcement, seven South American temples of The Church of Jesus Christ of Latter-day Saints will return to performing all living ordinances beginning Jan. 11, nearly 10 months after the Church closed all of its temples due to the COVID-19 pandemic.

Also, operations at four temples in England and South Africa are being paused due to local COVID-19 conditions.

The seven temples in the South America Northwest Area moving to Phase 2 — allowing for all living ordinances — in the Church’s four-phase reopening plan include:

And the four temples pausing operations are:

With the latest changes announced Monday, Jan. 4, the Church will have — as of Jan. 11 — the following breakdown of its 168 dedicated temples:

On Dec. 7, 2020, the First Presidency identified those four temples as the first to advance to Phase 3 in the Church’s four-phase reopening plan.

Patrons in the districts of temples in Phase 3 can begin scheduling ordinance reservations online via the temple’s information page at temples.ChurchofJesusChrist.org a week before the reopening date.

Phase 1 allows for limited living husband-and-wife sealings by appointment, while Phase 2 allows for those sealing as well as all other living ordinances, also by appointment. Phase 3 includes everything from the first two phases and the performance of temple ordinances for deceased individuals, with Phase 3 temple adjustments introduced by Church leaders on Dec. 7, 2020.

Of the 15 temples which currently have “paused” operations because of local COVID-19 conditions and restrictions, 12 had reached Phase 2 operations and the other three Phase 1.

The Church’s sole temple still closed due to the COVID-19 pandemic is the Kyiv Ukraine Temple.

An area-by-area listing of the current status of each of the Church’s 168 dedicated temples is available on the Church News’ temple reopening status tracker.

Since early May 2020, the Church has announced weekly which temples would be moving to Phase 1, 2 or 3 status the following week.

On Feb. 21 and 22, 2020, four temples in the Church’s Asia and Asia North areas closed because of the developing pandemic. By the end of that month, 24 temples had closed.

By March 24, 2020, a month after the first closures, the number of pandemic-closed temples had reached 111. A day later, the First Presidency announced the closure of all operating temples worldwide.

Temples remained closed for six weeks, until the First Presidency announced “a carefully coordinated, cautious and phased reopening of temples” on May 7, 2020. Less than a week later, on May 11, a group of 17 temples became the first to open in Phase 1, offering limited living husband-and-wife sealings by appointment.

In a July 20, 2020 letter, the First Presidency announced both changes to the temple endowment ceremony and the start of reopened temples to move to Phase 2. Seven days later, on July 27, the first 12 temples being upgraded to Phase 2 began performing once again all living temple ordinances, by appointment.

On Dec. 7, 2020, the First Presidency identified four temples as the first to advance to Phase 3 of the Church’s four-phase reopening plan as early as Dec. 21, 2020. On that Dec. 21 date, the Taipei Taiwan Temple was the first to have proxy ordinances joining living ordinances as being performed on a limited basis.

The four phases of the Church’s reopening plan are: