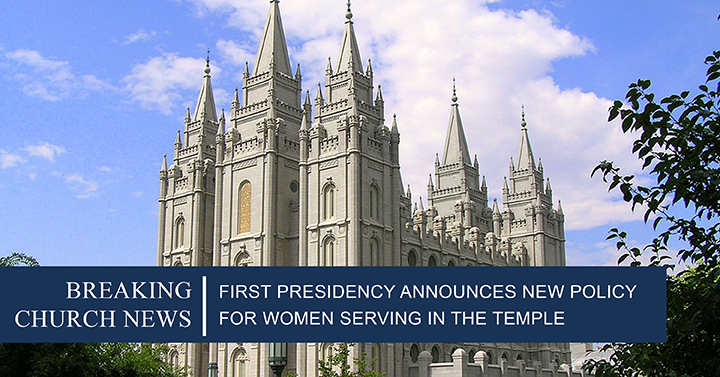 President Russell M. Nelson of The Church of Jesus Christ of Latter-day Saints announced an historic policy change Wednesday morning allowing women and children to serve as witnesses of sealing and baptismal ordinances performed in temples and chapels.

“We are joyful about these changes,” President Nelson told general authorities and officers during the leadership session of the Church’s 189th Semiannual General Conference, which also featured instruction from President Dallin H. Oaks and President Henry B. Eyring.

1.     Any baptized member of the Church may serve as a witness of the baptism of a living person. This change pertains to all baptisms outside the temple.

2.     A proxy baptism for a deceased person may be witnessed by anyone holding a current temple recommend, including a limited-use recommend.

3.     Any endowed member with a current temple recommend may serve as a witness to sealing ordinances, living and proxy.

“I testify of the importance of the work that the Lord has entrusted to each of us,” President Nelson said. “He has prepared us to serve at this time, and He will continue to help and sustain us as we seek to build up His kingdom on earth.”

The policy change, part of President Nelson’s fast-paced ministry, comes on the heels of his travels to Central and South America last month. Speaking during press interviews in Brazil, President Nelson said that the work of the Church “is moving forward at an accelerated pace.”

“I want our members to know that the Restoration is a continuing process,” he said. “And we have a lot to do before the Lord will come again.”

President Nelson spoke of both historic and recent changes to temple ordinances and procedures in announcing the instruction on witnessing.

“Obedience to sacred temple covenants is essential for us to qualify for eternal life—the greatest gift of God to His children,” he said. “As leaders in the Lord’s Church, we need to understand the eternal truths taught in the temple. We need to know the importance of and the difference between sacred covenants, ordinances, and procedures.”

President Nelson said that “any adjustments made to ordinances and/or procedures do not change the sacred nature of covenants being made. Adjustments allow for covenants to be planted in the hearts of people living in different times and circumstances.”

Quoting a prophecy from President Wilford W. Woodruff, the fourth President of The Church of Jesus Christ of Latter-day Saints, President Nelson said: “We have not gotten through with revelation. … President (Brigham) Young, who followed Joseph Smith . . . organized these temples and carried out the purposes of his calling and office. … He accomplished all that God required at his hands. But he did not receive all the revelations that belong to this work; neither did President (John) Taylor, nor has Wilford Woodruff. There will be no end to this work until it is perfected.”

President Nelson illustrated the width and depth of the policy change: “Imagine a beloved sister serving as a witness to the living baptism of her younger brother,” he said. “Imagine a mature couple serving as witnesses in the temple baptistry as their grandson baptizes their granddaughter for and in behalf of a dear ancestor.”

The temple, he said, is the object of every activity and every advancement in the Church. “All our efforts to proclaim the gospel, perfect the Saints, and redeem the dead lead to the holy temple. He has and always will direct how ordinances are to be performed so that we can understand and internalize our covenants with Him.”

President Oaks addressed the eternal nature of God’s children, His plan for them, and the commandments to love God and to love others.

His teachings built upon a talk President Nelson offered two weeks ago at Brigham Young University titled, “The Love and Laws of God.”

“While God’s commandments forbid all unchaste behavior and reaffirm the importance of marriage between a man and a woman, the Church and its faithful members should reach out with understanding and respect to individuals who are attracted to those of the same sex or whose sexual orientation or gender identity is inconsistent with their sex at birth,” President Oaks said.

Church leaders do not know why same-sex attraction and confusion about sexual identity occur, he said. “They are among the challenges that persons can experience in mortality, which is only a tiny fraction of our eternal existence.”

1.     God created “male and female,” and that this “binary creation is essential to the plan of salvation.”

2.     Modern revelation “teaches that eternal life, the greatest gift of God to His children, is only possible through the creative powers inherent in the combination of male and female joined in an eternal marriage (Doctrine and Covenants 132:19). That is why the law of chastity is so important.”

“When counseling with any members experiencing challenges related to their sexual orientation, Church leaders should affirm that God loves all His children, including those dealing with confusion about their sexual identity or other LGBT feelings,” President Oaks said. “Such members and their families have unique challenges. They should be offered hope and be ministered to as directed by the Spirit according to their true needs, remembering the admonition of Alma to mourn with those that mourn and comfort those who stand in need of comfort” (see Mosiah 18:9).

Because Latter-day Saints love God and understand His great plan of salvation and the significance of His commandments, “we manifest our love for our neighbors by helping them come unto Christ, repent, and keep His commandments,” concluded President Oaks. “This is part of bearing one another’s burdens that they may be light.”

During his remarks, President Eyring spoke of promises the Lord has made to Church leaders.

“He has done for each of us what He has always faithfully said He would do. This promise has been true in our service: ‘For I will go before your face. I will be on your right hand and on your left, and my Spirit shall be in your hearts, and mine angels round about you, to bear you up’ (Doctrine and Covenants 84:88).”

Using the allegory of the olive tree from the Book of Mormon, President Eyring said the efforts of leaders will not change the Lord’s timetable. “He will do His work in His own time and in His own way. We are assured that He will bless us for having labored out of love until the end of our days, however many or few they may be.”

Acknowledging the burden of local leaders to teach, love, correct, and encourage Church members, President Eyring quoted former Church President Spencer W. Kimball. “What we desire is to have Church programs serve Church members, not the reverse. We also want priesthood leaders to take into account, prayerfully and carefully, the needs of their members and to focus on meeting those basic needs.”

President Eyring said the organizational changes announced under President Nelson’s leadership have moved the Church toward “a home-centered and individualized leadership style.” Since being ordained president of the Church on January 14, 2018, President Nelson has spoken about revelation, repentance, using the correct name of The Church of Jesus Christ of Latter-day Saints, gathering Israel, and seeking the covenant path. Under his leadership the Church also implemented a “home-centered, Church-supported” Sunday worship schedule and changed the way members minister to one another.

“My hope is that you might listen in this training with faith,” President Eyring said. “We serve a living Savior, who calls us to serve with a perfect understanding of the needs of the people we serve for Him. He knows what needs to be done and when. He reveals His purposes to His prophets.”