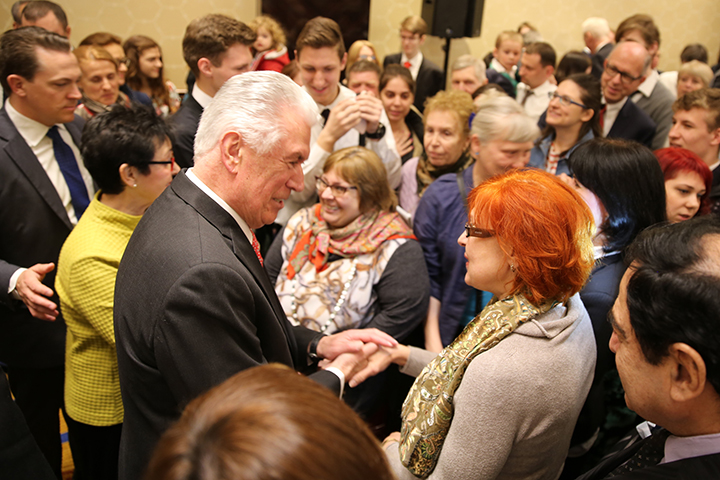 During a recent visit to Eastern Europe, Elder Dieter F. Uchtdorf of the Quorum of the Twelve Apostles of The Church of Jesus Christ of Latter-day Saints encouraged members in Russia to prepare their hearts for a new temple. President Russell M. Nelson recently announced that a new temple will be built in a major Russian city yet to be determined.

Elder Uchtdorf and his wife, Harriet, participated in a special conference of the Moscow Russia Stake on April 22, 2018. The meeting was attended by about 700 Latter-day Saints, including Church leaders in the region.

After the conference, Elder Uchtdorf and Elder Alexey V. Samaykin, an Area Seventy, were interviewed by historian, publicist, well-known journalist and editor in chief of the academic journal Science and Religion, Sergey Georgievich Antonenko.

“This announcement is a historic one and it’s a beautiful one,” said Elder Uchtdorf about the new temple to the journalist. “We have around the globe 159 temples, and the number is growing.”

This will be the first temple for Latter-day Saints in Russia. “Up until now if they wanted to go to the temple, they had to travel outside of Russia,” he explained.

Elder Uchtdorf said, “We’re very grateful for Russia to be a country where religious freedom is established. We may practice our faith here.”

The Latter-day Saint apostle said the members in Russia are “law-abiding, wonderful citizens” who love the tradition and history of their country.

“We have learned worldwide that it has always been a great blessing for a community to accept and invite a house of the Lord,” added Elder Uchtdorf. “And even though sometimes at the beginning there are critical voices, … these critical voices learn that the Mormons are good people. They are people to be trusted.”

The full content of the interview will be published in the June 2018 issue of the publication.

Elder Uchtdorf is the Church’s primary contact for the Europe and Europe East Areas, one of the new assignments he received in January following his service in the First Presidency.

During the conference in Moscow, Elder Samaykin compared the ministry of the Church with the unconditional and sincere love parents have for their children.

Sister Uchtdorf told the touching story of her family’s conversion to the Church, in which the prospect of an eternal happy family life played a key role. She said they noticed a special happiness that filled the lives of people who keep the commandments and share the joy of the gospel with their neighbors.

Elder Uchtdorf stressed how important it is to bear witness of Christ’s love through service to others.

During their visit to Europe, the Uchtdorfs also met with members and volunteers in St. Petersburg, Russia, and Tallinn, Estonia.

“With this announcement of course of the temple, there’s a marvelous excitement among the members,” said Elder Uchtdorf during an interview in his office following his return to Salt Lake City; however, he cautioned that the process of building a temple in Russia will be slow. “We have to have patience.”

“Our hearts have to be ready for the temple,” said Elder Uchtdorf. “It’s like East Germany. They waited for a temple forever, but they had current temple recommends … and eventually faith was rewarded. And that’s the same thing which will happen in Russia.”

“When we are ready, the temple will be ready,” he added. “I hope I can help them to feel happy to be a member of the Church.”

Elder Uchtdorf said he and his wife also encouraged young single adults and other members of the Church to stay in their country to build up the Church as they did in Germany. “Eastern Europe is losing a lot of good members emigrating, leaving the country.”

Elder Uchtdorf said he learned some insights about Russia as he met with Anatoly Antonov, the Russian ambassador to the United States, in Washington, D.C., prior to his international trip. “It was very helpful because I told him what the Church is all about in Russia, and we are just good people [who] … just want to live their faith and want to be good citizens.”

The apostle also had a courtesy meeting with Rüdiger von Fritsch, the German ambassador to Russia, at the embassy while he was in Moscow. “He had some good counsel. … He’s a friend of the Church and of us.”