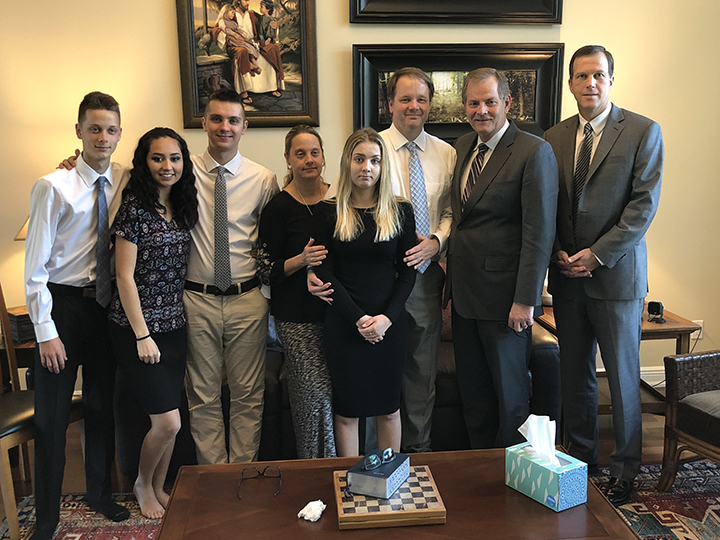 What does one say to comfort a grieving parent in the immediate wake of a daughter’s death — especially when her passing came by bullet in a school shooting that claimed her life and the lives of 16 others, while injuring a dozen others?

On February 16, as Elder Gary E. Stevenson of the Quorum of the Twelve Apostles and General Authority Seventy Jörg Klebingat visited the home of Latter-day Saints Ryan and Kelly Petty, they pointed the family to the comforting Christian doctrines of God’s omniscience and the reality of life and joy in the world to come. The Petty’s youngest daughter, Alaina, was fatally wounded in the February 14 shooting at Marjory Stoneman Douglas High School in Parkland, Florida.

“[They told us that] although what happened last Wednesday was a surprise and a shock to us, it was not a surprise to our Heavenly Father — nothing is a surprise to Him and Alaina is continuing on,” Ryan Petty said. “[They also said] although we’re sad here, across the veil there are no tears — there she is not sad, she has a different perspective than we do. I’m sure she misses us like we miss her. She now has the different perspective that allows her to miss us but not to be sad. And that meant a lot to Kelly and me.”

Alaina and two classmates killed in the shooting were cadets in the school’s Junior Reserve Officers’ Training Corps and have received the Medal of Heroism for their actions in the shooting. Alaina also loved to serve in other ways, with her friends, even engaging in Mormon Helping Hands cleanup efforts in 2017 after Hurricane Irma.

“There’s a great group of young women in our [congregation] that she served with, and they found great joy in helping those that had lost almost everything [in the hurricane] sort through what was left, figure out what was salvageable, figure out what needed to be thrown away, and do that in a very tender and caring way,” Ryan said.

He also expressed thanks to be on the receiving end of sensitive, personal service from top Church leaders when they needed it most.

“To have Elder Stevenson and Elder Klebingat come and minister to us personally in our time of need was — well, we’re just so grateful for that.” Ryan added.

Prior to visiting the Pettys, Elder Stevenson and Elder Klebingat ministered to Latter-day Saint Madeleine (Maddy) Wilford and her family in the intensive care unit of the Broward County North Hospital. Maddy was shot twice — one bullet to a shoulder and another to her back — and underwent three surgeries. Miraculously, she was released from the hospital February 21.

Maddy said she found important comfort in the apostolic blessing Elder Stevenson gave her and her family during the visit. “It was very spiritual and [there was] an immense amount of peace throughout the room,” she said. “The peace I felt really helped.”

Maddy’s father, David, described the blessing as “an incredible experience. It was something I hadn’t seen before. He used it to bless the whole family. It was a really interesting gospel moment. There’s no question in my mind that’s why she’s doing so well.”

Maddy was the captain of the Stoneman Douglas girls’ basketball team and wants to attend Brigham Young University. “[God] has a plan for her. As her dad, I’ll support whatever that is and do what I can to help her with it.”

“I was just dumbfounded that they would do that,” he said. “I was extremely grateful they came and took time to give that level of comfort and heal her.”

Maddy thanked the countless numbers of people who offered prayers in her behalf. “Knowing everyone was out there praying for me was overwhelming, learning how much love was out there for me from so many people,” she said.

She was heartbroken to learn of Alaina’s death. Though the two were a few years apart, they shared some good times at girls’ camps for two or three years.

“[Alaina] was amazing. I loved her,” Maddy said. “She always lit up the room. She was always so lighthearted and spirited. She always made people laugh. It was rough losing her, on finding out she was dead. … She was a tough girl. I know she’s in a good place.”

At a youth fireside two days later in Orlando, Elder Stevenson told the crowd of 1,300 that though it’s difficult to understand the evil in the world, faith in Jesus Christ allows us to find purpose even in the face of incomprehensible cruelty.

“We know that Heavenly Father could have stopped this tragedy,” Elder Stevenson said. “And we ask, why didn’t he? The answer we have is that we know that there is a Father in Heaven, an Everlasting God, and he understands the purpose for everything. Our faith gives us the comfort in this knowledge. I know that the Lord knows why and one day we’ll know with a perfect clarity too, because we’ll be able to see through his heavenly perspective.”