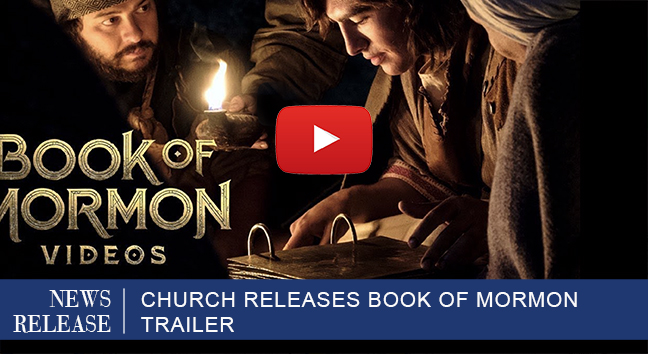 The long-awaited trailer advancing the Book of Mormon Videos series project has been released, along with the schedule for releasing the first 15 episodes from two years of filming, editing, and production.

The first series of videos—from the first two years of filming—depicts Book of Mormon teachings and events from 1 Nephi through Enos in The Book of Mormon: Another Testament of Jesus Christ. New videos and images are scheduled for release every Friday from September 20 through December 27, with additional videos available during 2020 and 2021.

“We’re just so overjoyed to share with the Church and with the world what we’ve been experiencing the last few years,” said Elder LeGrand R. Curtis Jr., a General Authority Seventy leading the project’s steering committee.

The collection of videos from the multi-year filming project in Utah and throughout North America is similar to “The Life of Jesus Christ Bible Videos” project, which was completed in 2016. Filming started on the Book of Mormon videos in the summer of 2017, with third-year production ongoing now at the Church’s Motion Picture Studio in Provo, Utah, and the Goshen outdoor studio—often referred to as “the Jerusalem Movie set”—in Goshen, Utah.

While the project originally called for the first videos from first-year filming to be released a year ago in September 2018, Church leaders decided to have the videos series be released just prior to start of the Church’s 2020 curriculum, which will focus on the Book of Mormon.

“Tying it with the curriculum has just been wonderful,” said Elder Curtis, “I love the fact that we’re going to start September 20 and release the first one,” and then do one a week to have the 15 out by the first of the year, before families start turning their attention to the Book of Mormon and before teachers start preparing their lessons their lessons on the Book of Mormon.”

The video project is expected to result in about 33 episodes=length videos (about 12 minutes on average) and 100 shorter videos (about 3 minutes on average, segmented from the longer episode videos), totaling nearly 8 hours of videos. First-year filming focused on stories from 1 Nephi 1–18—particularly on Lehi’s family in Jerusalem and their journey to the New World, with the second season continuing in the Americas with Book of Mormon prophets such as Nephi, Jacob, and Enos.

Sister Reyna I. Aburto has been a part of the project’s steering committee since her call as Second Counselor in the Relief Society General Presidency in April 2017. “And some people have been working on this even longer than me,” she said, speaking of her excitement for viewers to watch the videos and feel the spirit of their messages.

“This is going to make such a big difference in so many lives, because the truths that are contained can change lives. These videos are going to help with the process, because they hopefully are going to bring people to the book,” said Sister Aburto of the Book of Mormon.

“Because,” she continued with a smile, “the book is always better than the movie, right?”

She said she anticipates the videos will help people “to learn about Jesus Christ and about His mission, His ministry, His doctrine, His teachings, which are teachings of goodness and love for every life. This is such a needed message, right now; this message is so needed in the world.”