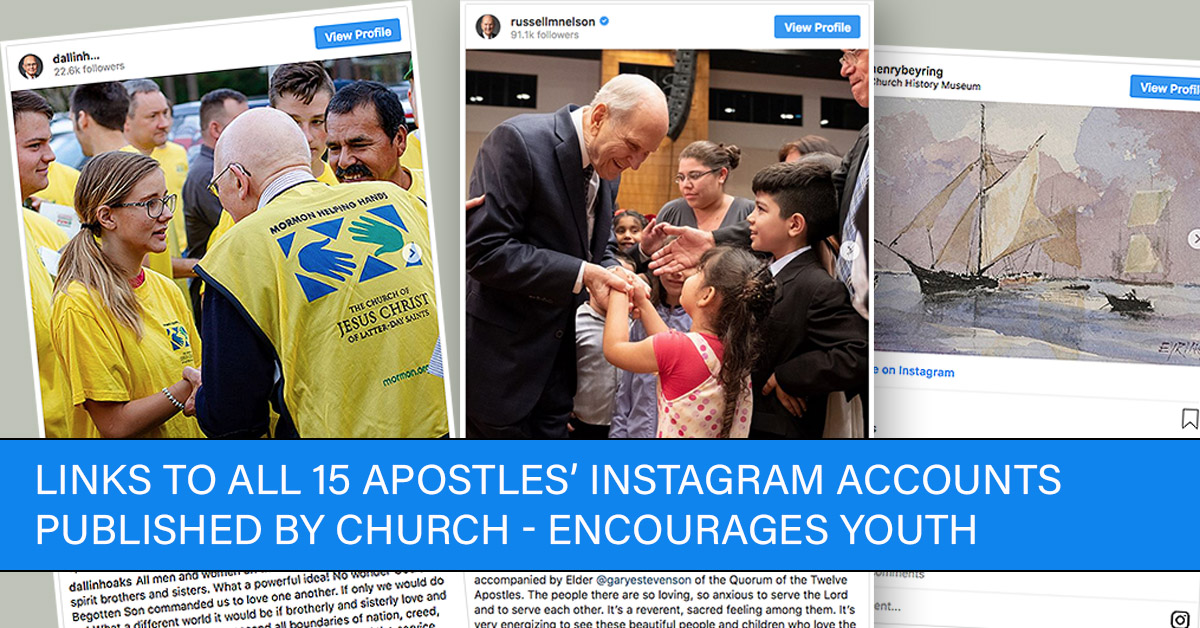 NAUVOO NEWS – In an effort to increase their ability to reach young adults and youth, the First Presidency and Quorum of the Twelve Apostles are now actively publishing inspiring gospel messages on Instagram—a photo and video-based social media platform.

President Russell M. Nelson became the first member of the First Presidency to publish on Instagram on November 1 when he shared some thoughts and photos upon the completion of his recent visit to South America.

“This is a global ministry. We are prophets for the whole world, to all of God’s children—not just the members of the Church,” President Nelson said in his first Instagram post. “So, on this tour, we talked to people in five different countries. If there are 200 or more countries in this world, five is such a small drop in the bucket! We’ll get around, but we’ll still miss more than we’ll touch. But we’ll try. We won’t give up just because it’s a big job. We’re just at the exponential phase of growth. And it will continue.”

President Henry B. Eyring and President Dallin H. Oaks published their first Instagram posts in the days following. The First Presidency’s presence on Instagram comes on the heels of the Quorum of the Twelve’s initial participation, which began in July of this year. In addition to Instagram, each member of the First Presidency and Quorum of the Twelve has a presence on Facebook and Twitter.

The Church leaders’ use of social media platforms demonstrates a desire to connect with members around the world and use technology in a positive way to emphasize the global nature of the Church. According to Newsroom, Instagram is a platform used by over 1 billion people worldwide, the majority of which are outside of the United States.

“We have been tremendously blessed in recent years to reach people around the globe with messages that promote faith in Jesus Christ in ways that simply were not possible when I was a young man—or even a young father,” said Elder D. Todd Christofferson of the Quorum of the Twelve Apostles. “These advancements in communication are a blessing. We expect to continue to utilize digital channels—such as Instagram—that best help us in our desire to share the Savior’s message of hope, love, and peace.”

With 72 percent of teenagers using Instagram on a daily basis, according to Newsroom, the platform is a great way for Church leaders to share messages of love and hope with the youth and young adults of the Church and exemplifies the efforts to connect with them on a more personal level.

“I love having the Apostles on Instagram,” said Bethany Reynolds, a young adult Latter-day Saint in Melbourne, Victoria, Australia. “I was really inspired during my 10-day fast [following the invitation of President Nelson] to use social media less [and] to also change what I was seeing on my feed. … I unfollowed a lot of pages, and it’s been so nice to fill my feed and my mind with uplifting, positive, and inspiring posts and messages like the Apostles’ posts instead. Can’t wait to see them post more!”

Following are links to all 15 of the Apostles’ Instagram accounts: