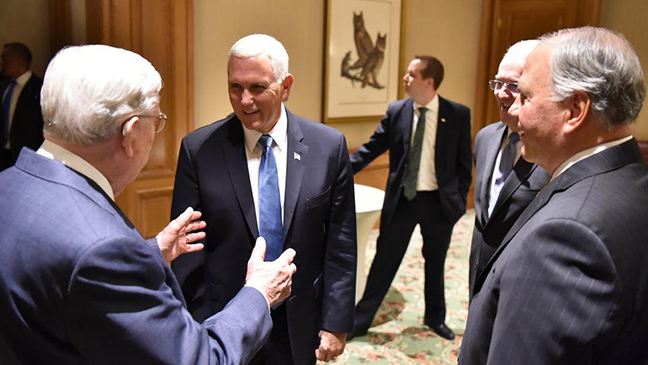 “We were pleased to honor the request of United States Vice President Michael R. Pence to meet with Church leaders during his time in Salt Lake City,” a Church statement says. “President M. Russell Ballard, Acting President of the Quorum of the Twelve Apostles, Elder Ronald A. Rasband of the Quorum of Twelve and Elder Jack N. Gerard of the Seventy met briefly with him at his hotel, where they spoke of the value of faith and religious liberty in America and expressed our appreciation for his leadership.”

The Church meets with many government leaders around the world on a regular basis. In 2019 alone, Church leaders have engaged with government officials from French Polynesia, Ghana, Kuwait, Micronesia, New Zealand, Tonga, the United States and Vietnam. While The Church of Jesus Christ of Latter-day Saints is a global faith that maintains a position of strict neutrality in party politics, these bridge-building meetings help church and state come together in a spirit of mutual learning and care to better support society’s common good. This includes, from the Church’s perspective, the encouragement of laws that preserve the rights of families and individuals to worship, work and live in peace.