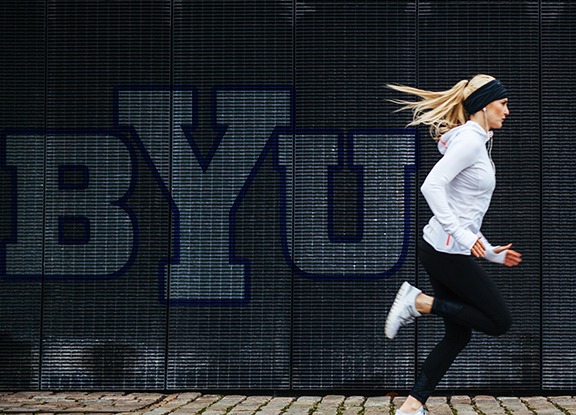 Although most people have been saying it for years, research from Brigham Young University now shows that exercise – especially running – helps with the negative effects of stress.

“You can’t go wrong with exercise,” said Jeff Edwards, associate professor of physiology and developmental biology at BYU and lead on the research. “I think everybody knows that exercise is good for mental health or stressful things, but [it is also important] to know that it can counteract negative effects of stress on cognition and on memory.”

A new BYU study, published in the journal of Neurobiology of Learning and Memory, shows that running alleviates the negative impacts that chronic stress has on the part of the brain responsible for learning and memory.

Researchers looked at the hippocampus of the brain, where memory formation and recall occur. When the connections between neurons are strengthened over time, a person’s memory function and recall is optimal. The process of synaptic strengthening is called long-term potentiation (LTP), and when chronic or prolonged stress weakens those connections, the LTP decreases. Those decreased levels impact a person’s memory.

“I was surprised nobody has ever done this yet, and kind of shocked, because it seems like an important question because nobody really just has exercise, or just has stress in their life,” Edwards said. “So, the question really for this paper is what happens if people are exercising while they are having stressful events?”

The researcher looked at four groups of mice—one group that used running wheels over a four-week period, another group that was left sedentary, one group that used running wheels and was exposed to stress-inducing situations, and another group that was sedentary with stress-inducing situations. Researchers induced stress by having the mice walk on an elevated platform or swim in cold water. An hour after the stress induction researchers measured the LTP.

“Turns out that when you are exercising an animal at the same time stress is occurring, it mitigates or negates the negative impacts of stress on this LTP,” Edwards said.

The researchers looked at different types of stress, focusing on acute stress and chronic stress. Their findings concluded that exercise provided even more than just higher levels of LTP; it also improved memory. Mice that had exercised made fewer errors in a maze-running experiment meant to test their memory.

Recognizing that a person doesn’t have control over every situation they face in life, Edwards said it is important to recognize what he or she can do to make their life less stressful.

“We can’t really control stress in our lives, and you never can predict when stress is going to happen,” said Edwards. “But we are finding that we can control our cognition … even when stress comes; [we are able to reverse] some of the negative effects.”

Edwards said that research supports what Church members have been taught about being a wise steward of their body.

“The Word of Wisdom is a code of health, and although it doesn’t specify being physically active, we know [exercise] has benefits on body and brain, on cognition and memory function, and depression and anxiety,” Edwards said.