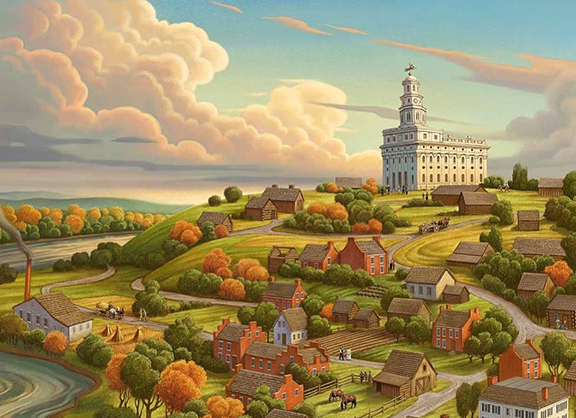 NAUVOO NEWS – The Nauvoo pageant is a performance based on actual records, accounts, and journals from the early days of the Restoration. Many of the characters portrayed in the Nauvoo pageant are real people, some of whom have names that are recognizable to Latter-day Saints. Other characters are composites of the experiences of several Saints of the time.

Visitors who haven’t been to Nauvoo in the last few years might have missed the debut of a new major performance: Truth Will Prevail, often simply called the British Pageant. This newer pageant was created by Church members in the United Kingdom, who performed it in Chorley, England, in 2013. This story of Church members in the British Isles was soon adopted into the Nauvoo pageant schedule in Nauvoo as well, and the two pageants, Truth Will Prevail and Nauvoo, are now performed there on alternating nights.

Both performances are preceded by the “country fair,” where members of the family cast host a variety of activities for visitors, including dancing, sack racing, pulling handcarts, games, and crafts.

Young performing missionaries also put on a variety of shows and events, and some of them participate in the pageants as well. The core cast members of the Nauvoo pageant also put on a set of historical vignettes, reprising their roles from the pageant. These shorter performances give visitors an opportunity to experience certain significant parts of Nauvoo’s history in greater depth than they are shown in the pageants.

The vignettes include a retelling of the early history of the Relief Society, readings from letters exchanged between Joseph and Emma Smith, an excerpt of the Prophet Joseph’s sermon at the funeral of his friend King Follett, and stories of the missionary experiences of some of the early Apostles of this dispensation.

Missionaries, including senior missionaries, host many activities and events around Nauvoo as well, including cart rides pulled by horses and oxen, teaching about the old-fashioned blacksmithing or brickmaking methods in re-created or preserved buildings of Old Nauvoo, and even a musical performance.